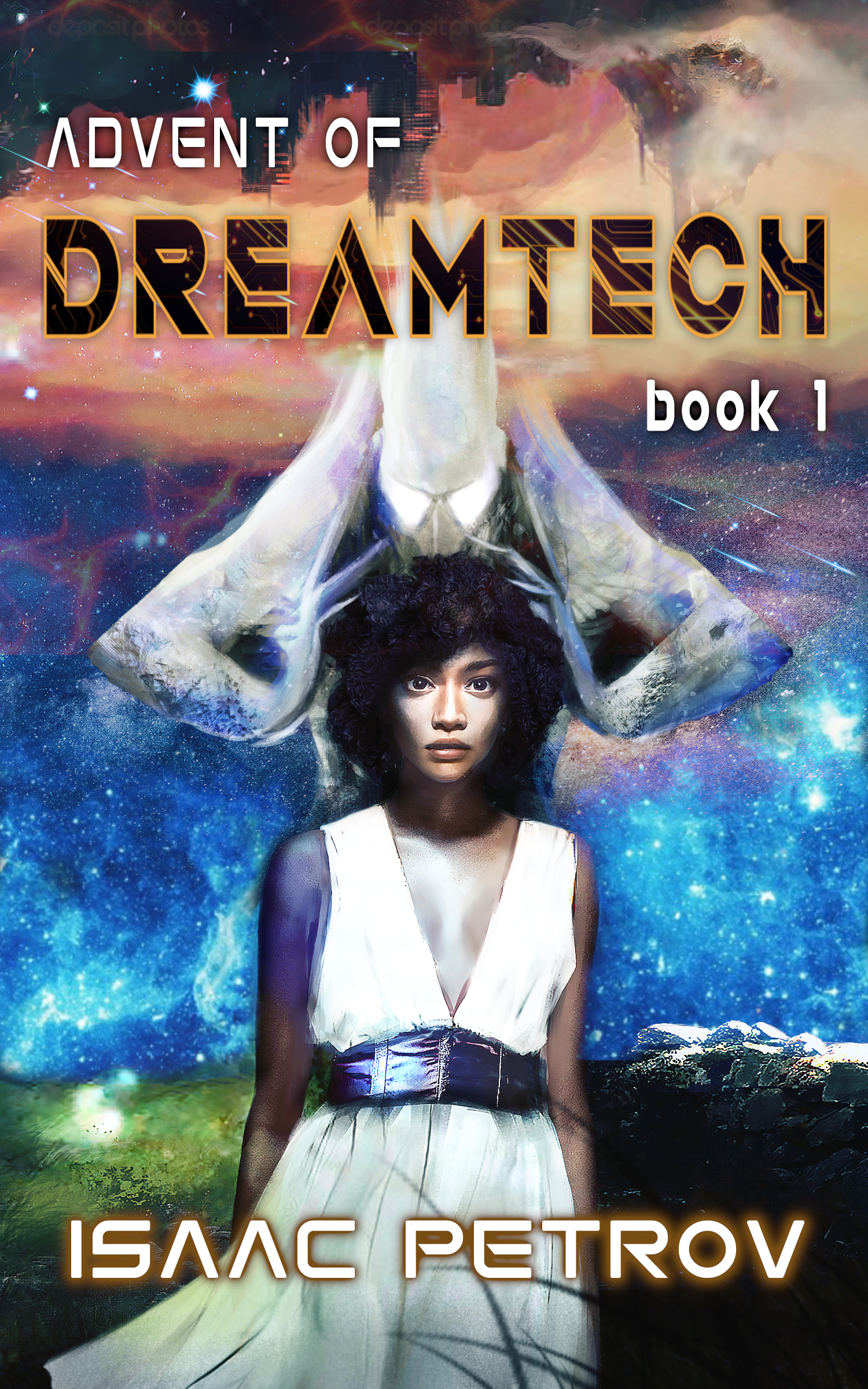 At the end of history, they arrived—in her dreams.

Civilization has long since collapsed—the legacy of an inescapable disease. Only a faction adapted to lifespans of a mere twenty-seven years, and thrived as the global rural utopia known as Goah’s Gift. A happy society, oblivious to its own fragility.

A step away from extinction.

This is the epic story of a badass woman that meets an alien deep in her dreams. An alien who might have a secret agenda.

This is the story of Dreamtech, and the impact of a bizarre and disquieting alien technology on a dying human world.

Click to start reading now this award-winning trilogy starter and experience Edda’s epic first-contact journey in your own skin. Delve into a world of dystopian decadence and shared-dreaming alien wonders. Discover how some teenage attitude—pumped up by the power of Dreamtech—blows human history out of the water.

In Advent of Dreamtech, we get an incredible glimpse into humanity's future. Author Isaac Petrov is a new name to me, but he has certainly done his homework. We, the readers, interact with the world through the eyes and feelings of main character Ximena, an aspiring historian eager to learn about perhaps the most intense revolution in humanity's history: the Leap-Day Reformation and the Century Blasphemy. It is in her pursuit of this knowledge that we first experience the eponymous dreamtech. I'd recommend this book to any sci-fi reader out there. If you like strange new technology, alternate history tales, and awesome heroines, this one's for you!

If you are looking for an exciting, detailed, intricately woven science fiction novel, look no further than Advent of Dreamtech by Isaac Petrov. A story told in layers of dreams within dreams, this first installment of an intended trilogy takes the reader on a mind-bending ride a la the movie Inception. And all of it happens in a pair of beautifully imagined future worlds. The use of dream layers in the storytelling would be fraught with literary danger for a lesser writer, but Petrov does a masterful job of juggling all of them so that the reader is never confused about what is happening where or when. This is in itself impressive, but the author goes on to achieve even more: a richly imagined world with fascinating, unique family and societal structures, as well as new types of political and religious systems.

I could not put it down. Edda’s story is an action movie on the page. One minute she’s sneaking into a dark morgue, and then, a few pages later, something is blowing up or burning down. This dramatic story of a one-girl revolution against her society’s entire belief system is contrasted with Ximena’s calm, studious interest in her world-famous teacher’s history lecture. But slowly, inexorably the whole dynamic between these two intertwining stories begins to shift.
Beliefs are called into question. Censorship rears its ugly head. And we are asked to consider: What is the truth? Is history fact? Who controls what we are taught? And how do we distinguish truth from falsehood? In a world where “fake news” has become a buzzword and the “reality” of an event is widely different dependent on the source, Petrov brings us a highly relevant story to consider.

Isaac Petrov promises no-bull science fiction, which is exactly what we see delivered in Advent of Dreamtech. Petrov has crafted a straight-talking story with a fast-paced plot that introduces readers to a bevy of interesting concepts and new storytelling devices that turn the idea of seeing dreams into a post-apocalyptic nightmare. I particularly enjoyed the dark psychology and emotional exploration of the Alien Master section of the story, which was totally fascinating and wove itself back into the main ideas of the plot in such interesting ways. Overall, I would recommend Advent of Dreamtech to science fiction readers seeking exciting new concepts, fast-paced writing, and epic settings with plenty of danger and intrigue in every chapter.

⭐ ⭐ ⭐ ⭐ ⭐ I was blown away. Perhaps I'm not the most well-versed sci-fi fan, but I found the entire story very unique. It's literally all I've thought about for days.

⭐ ⭐ ⭐ ⭐ ⭐ I was surprised. I read a lot and I doubted I'd find something original these days. But this book is amazing. Entertaining and posing some serious questions at the same time. 5/5

⭐ ⭐ ⭐ ⭐ ⭐ This book takes you an one amazing adventure through the future in a way that you can’t stop reading! The twists and turns are shocking and above all perfectly placed.

⭐ ⭐ ⭐ ⭐ ⭐ I appreciate that the author kept the promise of ‘no-bull SF’ as there is hardly a silent spot in the story. Great work.

⭐ ⭐ ⭐ ⭐ ⭐ Lovely world building, story development, weaving and pace, plenty of surprises with characters you become really invested in. I honestly couldn't put it down.

⭐ ⭐ ⭐ ⭐ ⭐ Throw in a look at Pizarro's conquest of the Inca Empire, aliens and first contact, Neanderthals, serious and thought provoking discussion of social issues that are relevant right now. Little physical violence. It's not necessary. The characters risk everything emotionally and put their closest relationships on the line. A light touch on romance and just enough character-driven humor helps lubricate the intensity of the passion and drama.

⭐ ⭐ ⭐ ⭐ ⭐ The setting is complex - dreams within dreams within dreams, but it still all makes sense. (For contrast, when I watched the movie ‘Inception’ I was lost almost immediately and never did get the plot properly sorted out.) I’m impressed that the prose never stumbles, and as another reviewer pointed out, no typos or grammatical errors.

⭐ ⭐ ⭐ ⭐ ⭐ Yes. You should read this book!!! Isaac Petrov is a really good author and is able to craft a world that sucks you in and won’t let you go. This is one of those books that I found myself picking up and reading every chance I got... even if it was only a 10 minute break between meetings.